As mentioned in a previous post my current writing project is a novel set the 1860s in present day northern Arizona and New Mexico. I have temporarily titled the book, Moonlight Water-A Novel of the Navajo Long Walk. I say “temporarily” because the title implies coverage of a broader subject matter than will likely be the case.

Let’s start with the term “Long Walk.” For those of you who don’t know, The Long Walk occurred during 1863-64, when General James Henry Carlton, Commander of the Department of New Mexico during the Civil War, issued General Orders No. 15.

Pursuant to the order Kit Carson and an army of 900 New Mexican volunteers and Ute scouts forcibly deported the Navajo from Dinetah, their homeland in the Four Corners region, to Bosque Redondo (Fort Sumner) in eastern New Mexico .

The reasons for Carlton’s order were varied and complex, and will be covered later on, but in summary it concluded over 150 years of “war”, which consisted primarily of raiding and retaliation, between the Navajo and first the Spanish, then the Mexicans, then the Americans.  At the time the Navajo (or Dineh, “the people”)  were not only at war with the Americans (which included many people who were Mexicans just two decades earlier) but also the Utes, Comanches and nearly all of the Pueblos.

Well some of the Navajo were engaging in hostilities with all of aforementioned.  As is typical in any war, the great tragedy was in the number of innocent people who were harmed while trying to live peacefully –aka “collateral damage” in today’s vernacular.

However for those who survived the ordeal there was a “happy ending”, if such a term could be applied. Four years later, under the orders of General William Tecumseh Sherman, the tribe was allowed to leave Bosque Redondo and return to Dinetah. To my knowledge the Navajo are the only tribe in American history who were forcibly relocated from their homeland and then later allowed to return. Most of them still live in the Four Corners area today, the largest federally recognized tribe in the United  States.

My book will focus primarily on the three years leading up to Carson’s expeditionary force which embarked in the summer of 1863.

The period from 1860-1868, known is in Navajo history as Nahondzod.  This term translates loosely to “the fearing time.”  According to the New Mexico Office of the State Historian, Nahondzod was “a period of eight years of warfare and misery in exile… ushered in by the 1860-61 expedition conducted by Lieutenant Colonel Edward Richard Sprigg Canby.”

Why not title the book Nahondzod? I figured from a marketing perspective that a one word title with an unknown meaning to most would present too many challenges.  But for now I’ll stay with Moonlight Water-A Novel of the Navajo Long Walk.

Next questions: Now that the background and historical context have been provided, where or what the heck is “Moonlight Water?”  And what does it have to do with anything we’ve covered so far? 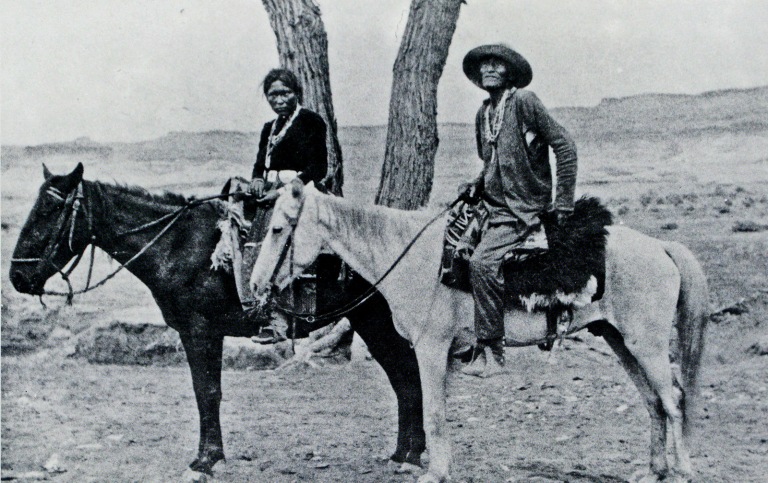 Notice I said “most of the tribe” was relocated.  Not everyone complied with General Carlton’s General Orders No. 15. It is estimated that nearly 2,000 of the approximately 8,000 Dineh  “stayed home” instead, hidden in their remote mountains and canyons.  Included among those who resisted and eluded the troops is the character shown in the photo above.  This is the guy who indirectly inspired me to write the book, Hoskininni -also known as Hush-Kaaney, which translates to “Giving out Anger”. He has been referred in several writings and recollections as simply as “The Angry One.”

After finishing my last book I briefly considered writing a biography about Hoskininni. However as Harvey Leake, author of several books with Four Corners subject matter and the Wetherill Family archivist, expressed after hearing my idea, “It would be a very thin book.”

Quite simply, there just isn’t much known about the man, either in writing or Dineh oral tradition. This is somewhat surprising considering I’ve been told by a reliable source that every other person you meet in the Monument Valley area will claim to be one of his descendants. Then again he did have at least eight wives, so maybe I would imagine there really are a lot of his descendants in the region.  But the grand total of information I was able to put together from a variety of sources totaled less than four pages -a very thin book indeed.

So then the thought occurred to me.  Why not write a novel about Hoskininni  set in the period of Nahondzod ? Then I could make a bunch of stuff up -anything I wanted!  There would be no agonizing over the accuracy of the number of casualties or how many sheep were stolen in any given skirmish.  Ah, given the historical context, the possibilities for interesting scenarios seemed endless.

In other words as the cliché goes, “When life give you lemons….”

Prior to Carson’s expedition, Hoskininni made his home in the vicinity of Oljato or Moonlight Water on the far northern end of today’s Monument Valley.  During  Carson’s  “roundup” he fled with a small group of followers to Navajo Mountain, where they remained until 1868.

In the following years, Hoskininni would become known as the “Emperor of Monument Valley” because of the vast influence he wielded.  He and his followers, including his son, Hoskininni Begay, were largely responsible for the four corners being designated as a “Lawless Region” for several decades, one that even the U.S Army was reluctant to enter.  He was also the reason Americans, usually would be miners (tourism wasn’t anywhere on the horizon then . . .not enough water),  were kept out of the area until 1905.

I wrote about Hoskininni briefly in Shadows on the Mesa.  In 1906 he granted permission to John Wetherill to open the first trading post in the Monument Valley region.  It retrospect it was a relatively easy proposition for Wetherill to sell.  Hoskininni was asked if he was tired of riding over seventy miles to Red Lake or Round Rock for his coffee, sugar, and flour.  Evidentially he was –not surprising considering “The Angry One” was probably well past sixty years old by then. The Wetherill Trading Post was opened that fall at Moonlight Water (which was several miles to the northeast of the present day Oljato which is shown in the two paintings below.)

Over the next few years Hoskininni became close friends with both the Wetherills, especially Louisa. When he died in 1909 he willed her over thirty Ute Slave Women. (Yes, slavery was actively practiced in the “Lawless Region” both well before and after the Civil War…one of the many interesting topics to be covered in the book.)

There will be more on Hoskininni, as well as Colonel Edward Canby, Manuel Chaves, Roman Baca, Francisco Hosta, Lafayette McLaws, Barboncito, Manuelito and whole bunch of other characters, relatively unknown or overlooked by history but very fascinating individuals nonetheless.

We’re just getting started…more to come.