I usually try to make sure my entries are consistent with the blog’s theme which is described in the “About” page. However sometimes I digress. This is one such time. The recent event I’m about to describe didn’t happen on the Colorado Plateau. But it did take place near the Tonto National Forest, which skirts the Mogollon Rim, the beginning (or end depending on your perspective) of the Plateau. And it definitely qualifies as a “misadventure.”

I was on my way to the Spur Cross Recreation Area trail head when, at the point where the paved road turns to dirt, I saw a goat walking on the right shoulder.

“How cute”, I thought. So of course I pulled over, put her in park and jumped out without closing the door or turning off the engine. I then walked to the front of the vehicle where I immediately began snapping photos.

The goat kept coming towards me, apparently neither threatened nor concerned. When he was a few steps away I stuck my hand out, intending to bend over and pet him. I had no sooner done so when he quickly sidestepped me and ran straight for the open car door. Before I could react he had jumped into the driver’s seat and sat behind the steering wheel as if to say “Let’s go!.”

By now two women in another car were pulled over on the other side of the road, also shooting photos while guffawing in disbelief.

As with most of my “brilliant ideas” it occurred to me way too late to take action. But we can all imagine how funny a picture of goat seated behind the steering wheel of a Ford Escape would be, though I would no doubt be accused of “Photoshopping” the image.

However at the time my only thoughts were “defecation and urination.” And not because they rhyme. I also had some tax documents on the passenger seat and since these particular members of the Bovidae family are known for eating “anything” the thought of redoing my quarterly payroll taxes was even more incentive to grab him by the collar and start pulling.

I was amazed at both how stubborn and heavy he was. It brought back recollections of trying to drag a full grown Rottweiler named “Tank” across a patio while he remained on his hind quarters. (I had been told the dog wouldn’t bite and fortunately he didn’t, but that’s a story for another time.)

Eventually I got would be car thieving Capra (who by now I had named “Clyde” after famous outlaw Clyde Barrow) out of the driver’s seat and back on the ground. After doing so I turned to the women in the car across the road and shouted, “Now he’s probably going to ram me.” They howled in laughter, louder than before. (Perhaps they liked the idea?) Instead Clyde just resumed walking nonchalantly southwards on Spur Cross Road.

In retrospect I’m glad his hooves couldn’t reach the gas pedal or I might not recall the incident fondly. Now, on to what was supposed to be the main event.

Along with the Superstition Mountains the Spur Cross Recreation Area is my favorite hiking grounds in the greater Phoenix high Sonoran Desert Region. Although the term “lush desert” sounds like an oxymoron, rest assured the phrase is very apt to anyone who has visited the area. Numerous web sites describe the area in detail so I won’t rehash here. I will only comment on my favorite features of Spur Cross which include some of the largest Saguaro Cactus found anywhere, a beautiful, sometimes wide though shallow creek (Yes, there really is a creek in Cave Creek…I’m amazed at how often I am asked this question) that runs for most of the year through the heart of the preserve and my favorite Sonoran Desert hiking trail Elephant Mountain.

Why is Elephant Mountain my favorite? The primary reason is the sights from the saddle. Not only does the view to the south offer a sweeping panorama of well-known landmarks in the region from Four Peaks to the west, the White Tank Mountains to the east, and Camelback, South Mountain, the Superstitions, etc. etc. etc. in between, but Hohokom ruins can be seen on the cliff to the immediate north. 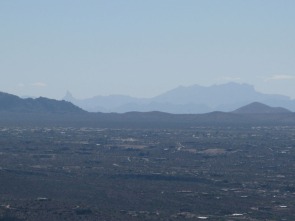 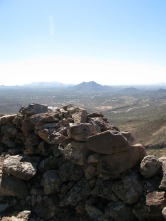 I chuckled to myself when I read some of the on-line hiking reviews. One site which offers star ratings reveals every contributor rates it a four star (out of five) except for one individual who “slapped” it with only three because he was evidentially unhappy about the exorbitant three dollar entrance fee. So be prepared! Bring large sums of cash.

I was also slightly amused that nearly every site rates the trail as “moderate”. I’m not saying that’s inaccurate for younger, experienced hikers, but for ordinary jamokes and “moderately” overweight aging fifty-somethings like myself “moderately strenuous” might be more appropriate. But what the hey, come on by and see for yourself. I promise you won’t regret it.

The weather was perfect (low 70s and clear) and as always the hike was enjoyable and inspirational. However when I made it back to the trail head I began driving home with a foreboding uneasiness, constantly looking in my rear and side view mirrors for Clyde Capra, who is still lurking out there somewhere.