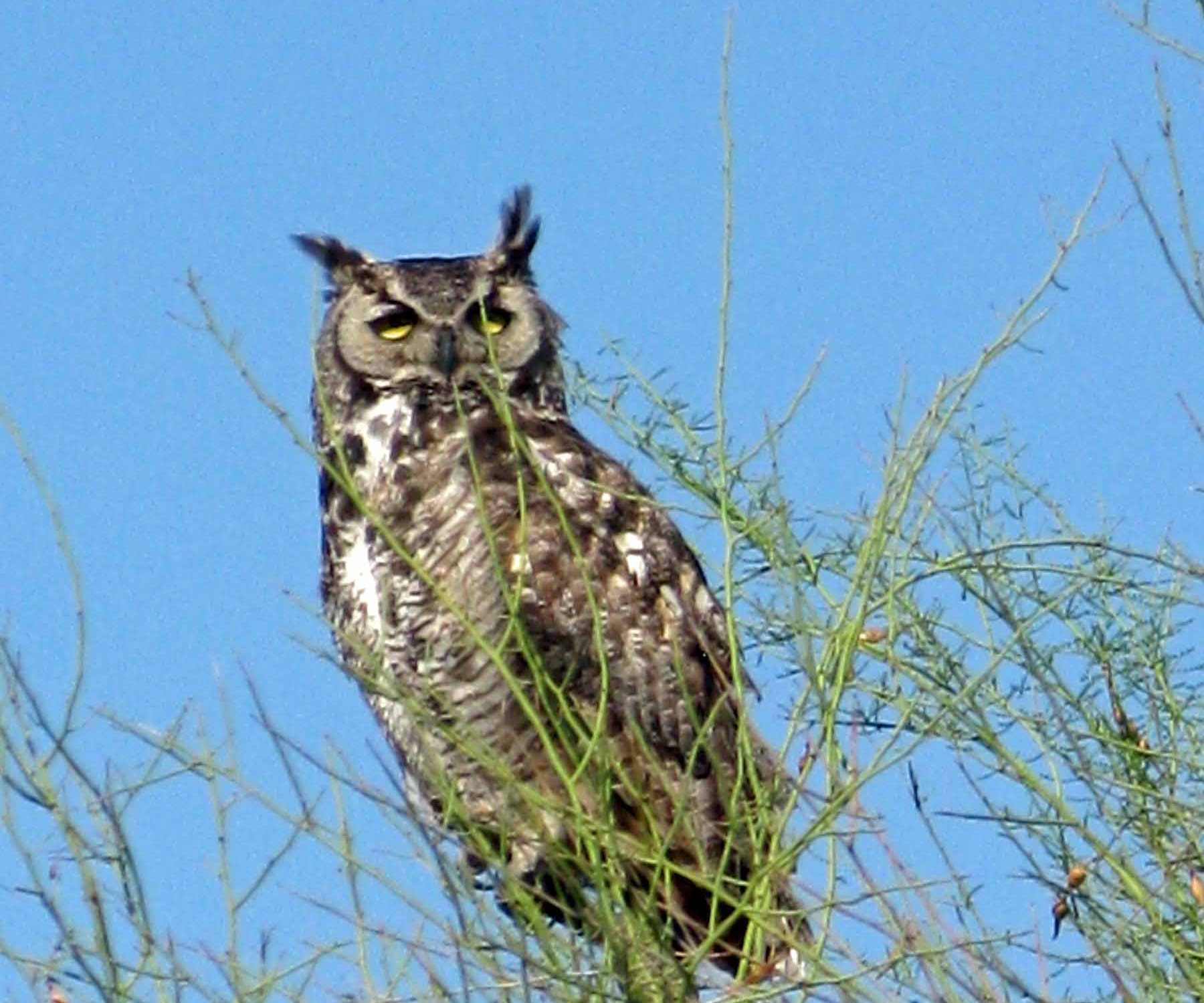 “There will come a time when you believe everything is finished; that will be the beginning. ”
― Louis L’Amour 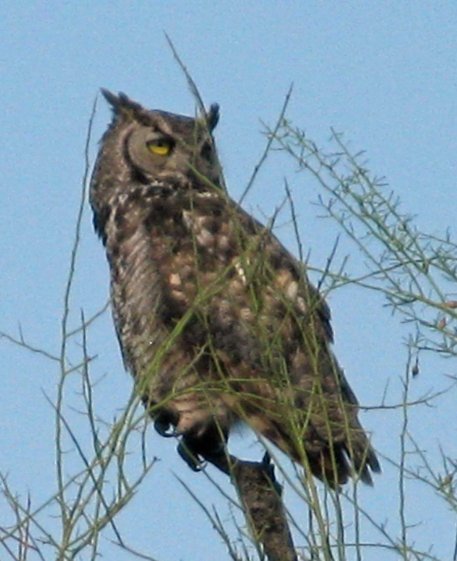 My wife, Barbara and I recently celebrated our “lucky thirteenth” anniversary in our current residence.  The previous evening, around sunset, I was sitting on the back porch enjoying the magnificent lighting effects of an approaching thunderhead.  Suddenly a bobcat dashed from a sagebrush near one of the porch pillars. He swerved to avoid my feet, then darted straight towards the Palo Verde grove in the backyard.  It happened so fast I remained frozen in disbelief until he disappeared into the brush.

Thunder roared! Lightening flashed! The heavens opened, the wind blew furiously and the rain poured…OK, now I’m exaggerating. It wasn’t quite that dramatic. It was a brief storm that dampened my clothing slightly and dropped the mercury about twenty degrees.  It felt good.

But the bobcat really did dash across the porch right in front of me. 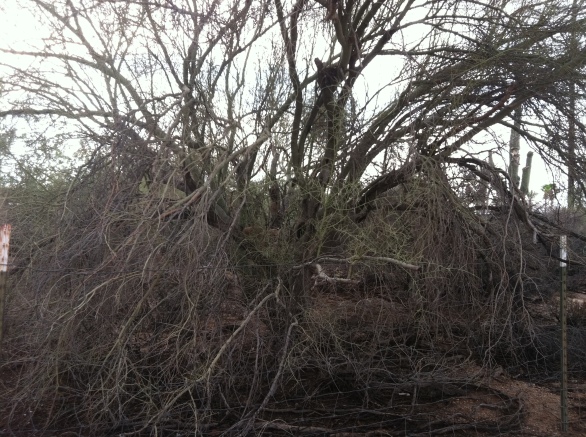 Where’s Waldo? Can you find the bobcat in the Palo Verde Grove? Shot near my house…with a camera, not a gun.

The next morning I shot these photos of an owl near the spot of the now famous “bobcat incident.” The owl is one of two who has nested near our house since day one.  But I had never seen either of the big birds in broad daylight until the day of our lucky 13th. Dusk or dawn, yes. But never when the sun was fully above the horizon.

Thirteen years, an owl in the daytime, a bobcat crossing my path.  What did it all mean!!!???  I pondered for hours without reaching any conclusions. Then I decided for omens so potentially deep and meaningful there was only place to go for answers…Facebook.

I posted the at the top of this entry and gave a short version of the previously described events. Then I asked for ideas on any potential prophecies.

“I think it just means the owl wasn’t ready to call it a night yet,” Barbara responded.

“It means pour a tall one, set back and enjoy the show,” Bryan Hill wrote.

“It means you were in the right place at the right time,” my Aunt Delores wrote.

“An owl and a bobcat in your yard means you don’t have an abundance of rodents,” my nephew, Brandon Henke observed.

Our friend and sometimes guide in the Navajo country, Vee Browne, wrote I should be glad it was a bobcat and not a coyote that ran in front of me. 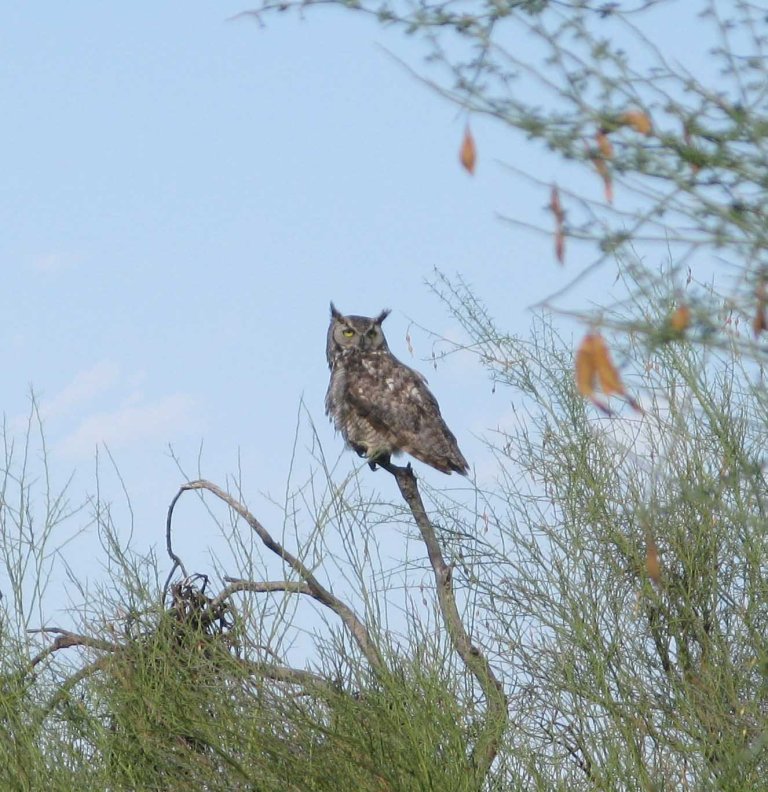 I found Vee’s response rather interesting. I understand why she felt it’s better for a bobcat to cross one’s path than a coyote.  Traditional Navajos believe coyotes to be the allies of witches and evil spirits.

Then again so are owls.

Although some cultures consider the owl to be a symbol of wisdom and good luck, others believe they portend death or impending disaster.

Input from my Facebook friends notwithstanding, I’ve always believed the meaning of life’s events is determined on an individual basis.  If I was told the owl means a death is in my future, I would decide it was to be a “death” in the metaphorical sense -an ending, which always leads to a new beginning. 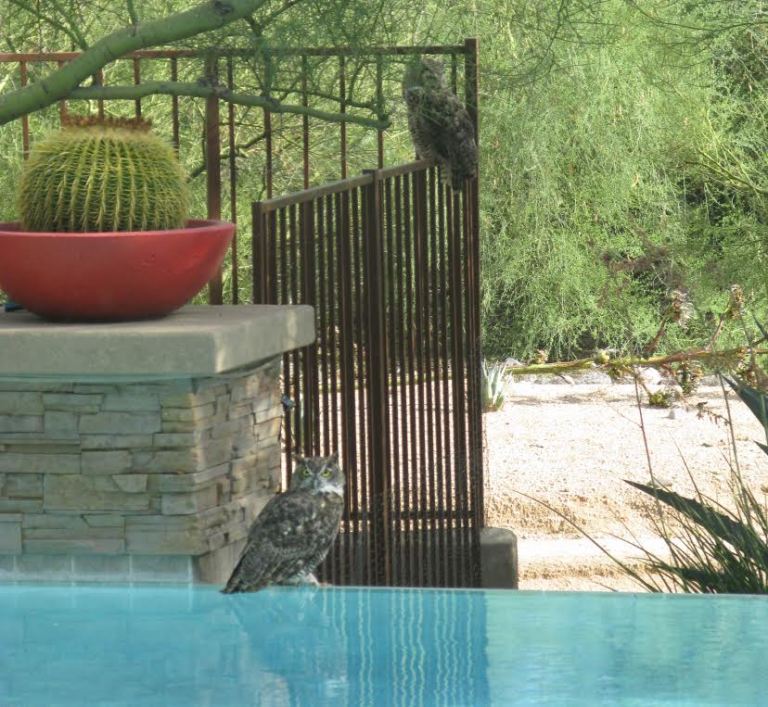 “You can’t go out there when the owls are here!”  Yet another happy hour by the Derrick’s pool ruined…

So of course the wise old hooter was just trying to tell me, “When one door closes, another opens.”

As I described briefly in the beginning of my previous entry, my physical life has been a little challenging the last few years.  I have since determined my nocturnal friend’s late morning appearance meant a new day is dawning -both metaphorically and literally. I’ve been struggling up a steep grade recently, but now I can look forward to a leisurely downhill stroll.

Well, one can only hope.

OK, enough of the philosophical musings. Intermission is over. Back to Keet Seel…