OK, I realize I may lose some clients with this post.  But if it prevents just a few people from making the same costly mistakes I’ve seen collectors make over and over and over again it will be worth it.

I recently received a message from an old friend and customer who I had not heard from in years.

He had fallen on hard financial times and was looking for assistance in liquidating his collection.  I told him I was no longer on the retail side of the business –haven’t been in years. But since he lived close by I would be glad to pay a visit and see if I could help.

Fast forward to the end of our meeting: I wasn’t able to help him with a single item.

San Xavier by Erna Lange.  30 x 40 Oil on canvas. Despite being a well educated and talented artist who left behind a large body of work, the value of Lange’s work has very little demand in the secondary market, primarily due to poor promotion of her estate.

Why?  Nearly every work had been purchased from local art shows in the Carefree-Cave Creek-Scottsdale area.  “So why does that matter?” you might be asking.

Well if you really don’t know you may wish to keep reading.

Keep in mind I’m only offering this advice on how not to put together a collection solely for those who plan on selling all or part of their holdings in the future.

If you just want to put together a bunch of stuff because it fills up wall space, helps bring together the orange couch and the lime green carpet, and you don’t care what happens when you decide to get rid of all or any of it then, as you’ve likely heard ad nauseum, buy whatever you like.

However be aware you probably won’t do much better than garage sale prices when the time comes to sell.  In fact, a yard sale is about the only place you’ll be able to move the goodies unless a consignment store decides they need to fill up some wall space.

Delicate Arch by Ed Mell. 40 x 40 Acrylic on canvas.  Mell is one of the few living Southwestern artists whose work has gained a serious secondary market following in his lifetime.  Auction prices typically exceed tens of thousands of dollars.  This gem was picked up for $5 (that’s right…$5) at a hair salon liquidation sale.  Hey, who needs Christies or Sothebys to start a great collection?

But if you want to put together a collection that will hold most or all of its value or possibly even appreciate over the long term then you may wish to read further.

Please keep in mind I DO NOT MAKE ANY OF THESE RULES.  While that may seem fairly obvious I often get reactions which indicate a belief to the contrary.  Honestly, I have no control over these factors. In the end the art market prevails -not small time dealers like me.

“I don’t make the rules,” I’ve told people more times than I can count, “But I’ve learned to live with them.” And so can you.

So let’s start with some of the basics.

The primary art market consists of works which are offered for sale for the first time.  This could be through a number of channels, including galleries, exhibitions, fairs, shows or even from the artist(s) directly.

The secondary art market consists of works which have already been sold at least once.  Auction houses are typically the most active in this area of the market, but there are galleries specializing in the secondary (like the Blue Coyote Gallery -when it was open) and even a few shows i.e. The LA Art Show.

When a secondary market has been established for an artist’s work, it is deemed “collectible”.

Collectible works can be purchased in the primary market, but as a percentage of the overall market it is low.  Very few artists gain extensive enough followings in their life time for their work to become collectible in the secondary market.  But it does happen. 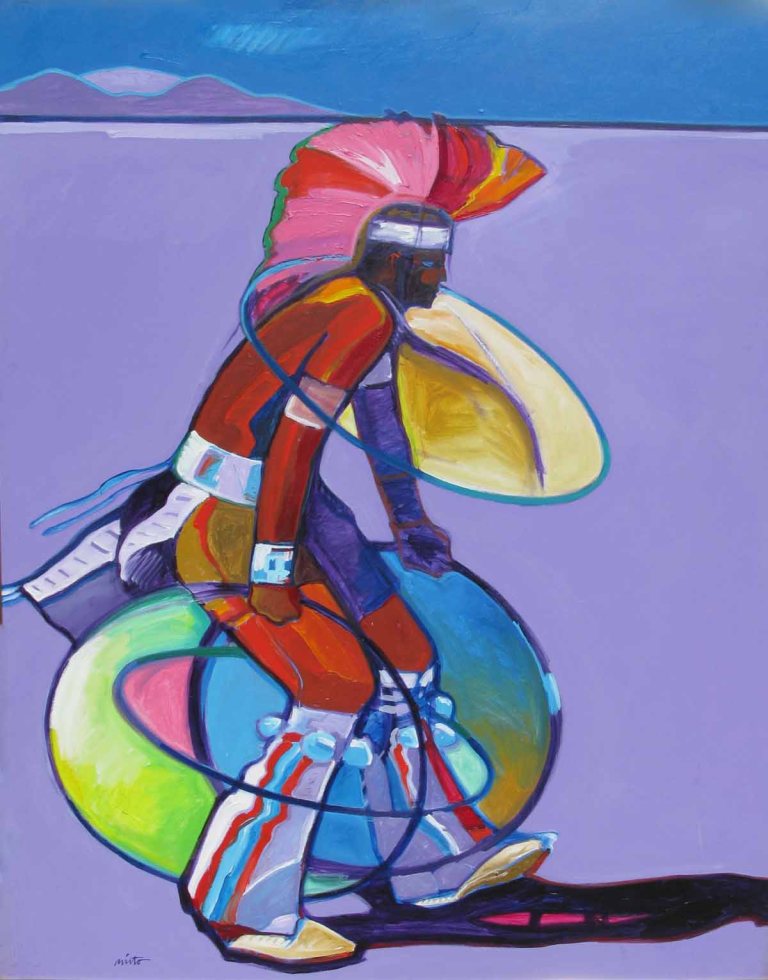 Hoop Dancer by John Nieto 60 x 40 acrylic on canvas.  Born in 1936, Nieto is still living. Prior to 2005 I could only find three (3) documented auction records of his work. Since then, over 85 pieces have sold at auction with highest going for over $15,000. Conclusion: In the last ten years a strong secondary market has developed for Nieto’s work.

How does one know when a secondary market has evolved for an artist?  There are no written guidelines here. One of my benchmarks is when over twenty-five auction transactions have occurred (this can be tracked via services like Askart.com) an artist’s work can be deemed “collectible”.

So this brings us to Rule #1

Do not buy any pieces by artists who have no known secondary market for their works. If you do, you will likely be lucky to get pennies on the dollar when you sell.

You don’t believe me?  OK, time for another war story.

Several years ago I appraised the art collection of a famous Phoenix real estate developer whose fortunes took a serious dive in the 2008 meltdown.  Shortly thereafter he committed suicide.  The estate consisted of over 130 pieces. Only three had “collectability”.  “The Fritz Scholder pieces will likely sell for close to or maybe even a little more than the appraised value,” I told his personal secretary, “but everything else will likely sell at the auction for somewhere between 10-20 cents on the dollar of the original purchase price.  I could find no secondary market for any of these artists.”

All of the works had been purchased from high end primary market galleries located in places like Aspen, Rome, and  New York City.  Many were purchased for prices above $25,000.

As it turned out, the accuracy of my prediction surprised even me a little.  With the exception of the Scholder pieces, the  rest of the collection was auctioned for 16 cents on the purchase price dollar.  The art “investments” which exceeded over $300,000 were sold for a total amount just above $50,000.

So if you wish to avoid this kind of scenario, either for you or your descendants, here are some “Don’ts” and “Myths” to be aware of. 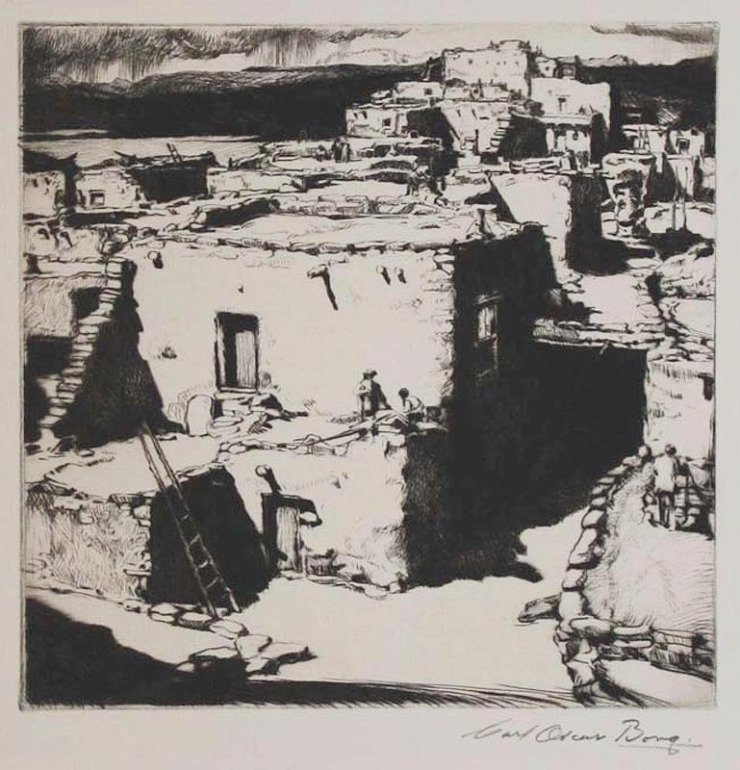 Walpi by Carl Oscar Borg. Dry point etching 7.5 x 7.5. Borg’s etchings routinely sell between $500 to $2,500. While these amounts are minuscule compared to the amounts realized for reproductions by artists like Marc Chagall they are definitely proof of exceptions to my last “don’t” rule listed above.

Myths
• When an artist dies the value of his or her work goes up. Actually it’s the contrary. With very few exceptions, the value of an artist’s work declines, usually significantly, after his or her death. Why? It’s simple. Lack of promotion. Unless he or she has left behind a large body of work, galleries aren’t going to spend any time promoting it. And obviously a deceased artist can’t do much promotion either.
• You might find the next Picasso hard at work in a tent show in Scottsdale. The odds of this are about the same as finding the next Apple Computer in the penny stock market. In other words, it’s not going to happen.

Mail Stop on the Overland Trail by Marjorie Reed. 24 x 36 Oil on canvas. Even with a long career of over sixty-five years as a freelance artist Reed sold every painting she created prior to her sudden death in 1996. While there was no posthumous promotion of her work by any galleries or dealers, over seventy of her paintings hung in the old La Casa Del Zorro resort in Borrego Springs, California for a decade after her passing. This served as permanent exhibit which helped the value of her work increase significantly after her death.

“You said at the beginning the guy you met was once a client. What about the works you sold him?”

This individual was actually my very first customer. He walked into the gallery the day before we opened and said he wanted to buy something just so he could say was our very first customer.
And so he was. He bought two paintings by a no name artist which I had acquired when I purchased a custom furniture store on Bell Road in Phoenix. The previous owner had them on the wall just to fill up space.
The pieces were actually fairly well done. However the artist had quit painting oil on canvas a few years before I even purchased the store. In other words there was definitely no secondary market for her work.

$1,800 later I had my very first art sale and my first customer had two paintings by a woman who, although still living, had moved on to other interests and was no longer painting. 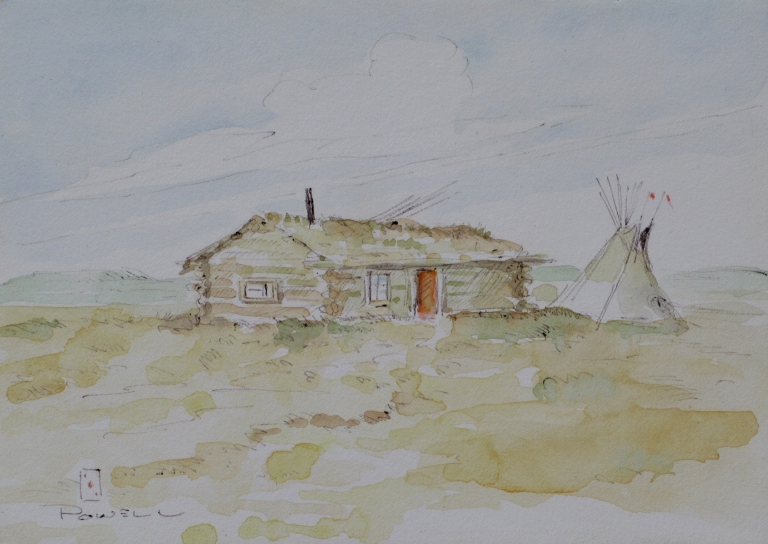 This all happened before I learned any of what I just wrote. Remember, I was just getting started. If I’d have known then what I know now the pieces would not have been for sale –at least not through the gallery.

But before I left my friend a few weeks ago I did contribute a little. I knowingly over paid for a small Ace Powell watercolor. Powell’s work is collectible and therefore has a secondary market. I purchased it for $300 and sold it the following week on ebay for $110.
Hey, what are friends for?

One thought on “How NOT to Collect Art”