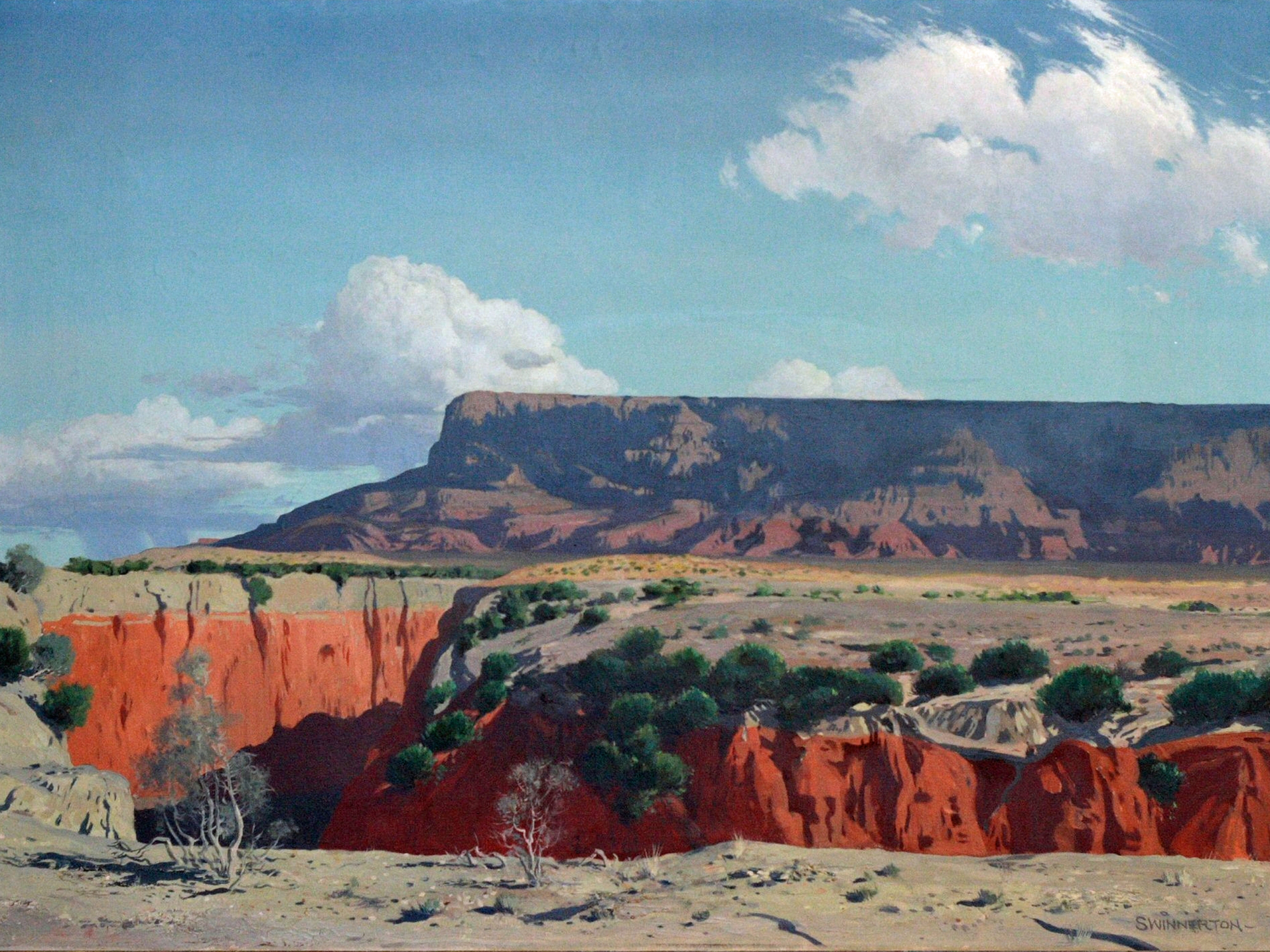 (Note: The Desert Caballero Western Museum in Wickenburg, AZ is hosting All Over the Map-The Picerne Collection of Arizona Landmark Art from October 21, 2017 until March 4, 2017. What follows is a brief recount of how the collection came to be.)

April 2005. Sunday -the final day of an exhibition at the Blue Coyote Gallery titled a “A Century of Arizona Landscapes”.

At the time I was nearing the end of a two year sabbatical –or so I thought.

A couple walked in about an hour before closing time. I found both of them very engaging but I had no idea who they were or what they did.

After about 20 minutes of viewing and conversation the man pointed to a small Claire Dooner-Phillips painting by the doorway. Asking price was $1,000.

The piece that started it all! Cherry Blossoms by Claire Dooner-Phillips. 8″ x 10″ Oil on board.

He told me if I reduced the price by $100 he would take it. I accepted.

We exchanged pleasantries for a while longer. He then left his contact information with  instructions to call him when I came across any early 20th century paintings of Camelback Mountain. 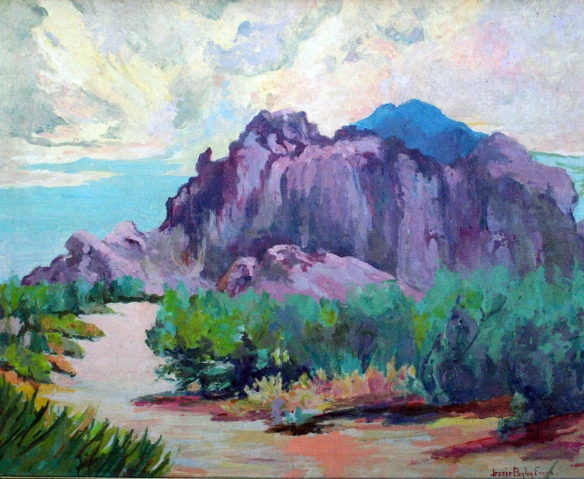 After they walked out the door I remember chuckling to myself “Nice couple, but I don’t think they’ll turn out to be very big collectors. This guy has to ask for a $100 discount.”

That was my first encounter with David and Doreen Picerne. 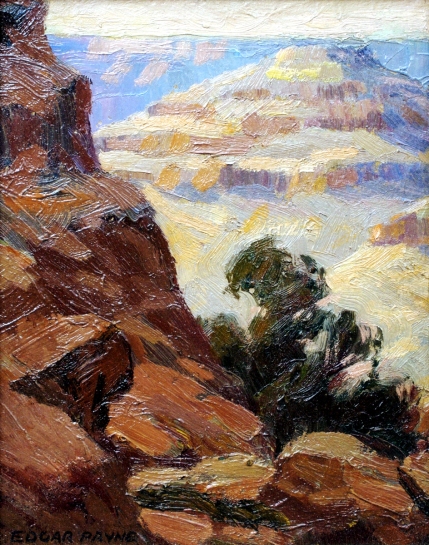 One of less than a dozen documented Grand Canyon paintings by noted California Impressionist Edgar Payne. 8″ x 10″ Oil on canvasboard.

My “ability” to read people and foretell the future can be witnessed first-hand in another  exhibition, only this time at the Desert Caballero Western Museum in Wickenburg.

Titled All Over the Map-The Picerne Collection of Arizona Landmark Art, it also features a lot of great paintings. The blurb from the events page of the museum’s website describes it perfectly.

The oldest piece in the collection. Frederick Dellenbaugh painted this view of the Grand Canyon sometime near the end of the 19th century, when the primary method of transportation from Williams, Arizona to the south rim was by stagecoach.      16″ x 12″ Oil on canvas.

The Picerne Collection of Arizona Landmark Art showcases representational paintings of the state’s mountains, canyons and vistas, created over the last one hundred years by scores of different artists from varying backgrounds, schools and eras.

The Collection has the dual objective of creating an historical archive of those artists who painted Arizona and fostering an increased appreciation for the state’s natural gifts. Focusing primarily, but not exclusively, on early twentieth century landscape paintings, the Collection includes work by a wide range of artists with diverse styles and backgrounds -some famous, some lesser known.

A tonalist painting of the Grand Canyon might sound like an oxymoron, but as you can see here DeWitt Parshall made it work…10″ x 12″ oil on board….one of my favorite pieces.

This view of the Superstitions was created by John Marshall Gamble, best known for his paintings of California Poppies on the Santa Barbara coast. It’s indicative of how many famous artists from various backgrounds and schools were attracted to Arizona for its subject matter prior to 1940. It was the cover piece for an edition of Westways-Touring Topics, the magazine for Automobile Club of Southern California from 1909-1959. 24″ x 30″ Oil on canvas.

So what happened in between April 2005 and now?

Cathedral Rock in Sedona by Sam Hyde Harris. Another one of my favorite pieces. 18″ x 24″ Oil on canvasboard.

A couple weeks after our first meeting I came across a Jessie Benton Evans (the elder) piece of Camelback Mountain -created circa 1925. (See above…actually about six images above.)  It was Dave’s second acquisition of what would eventually lead to a one hundred piece plus collection.

Over forty of the best pieces are on display between now and March at the Desert Caballero. 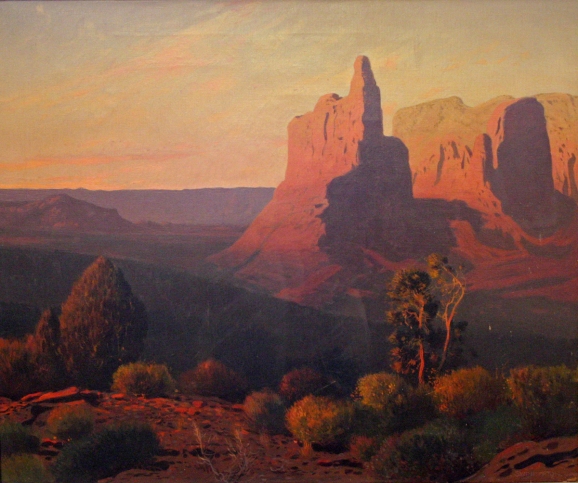 And of course there are several pieces by Jimmy, including this one of Oak Creek Canyon. 24″ x 30″ Oil on canvas.

Today I joke that Dave Picerne was responsible for turning my two year sabbatical into a ten year second career.

But as they say, many a true word is spoken in jest. It could also be said my second career continues to this day.

Welcome! Yá'át'ééh! "Looking for Jimmy" is a compilation of musings, adventures and misadventures by yours truly, an author, art dealer and appraiser. From 2002 until 2014 I was the owner and operator of the Blue Coyote Gallery in Cave Creek, Arizona. I have also authored five non-fiction books including "All Aboard-The Life and Work of Marjorie Reed" and "Shadows on the Mesa-Artists of the Painted Desert and Beyond." What all of my books have in common is they have taken place entirely or in part on the Colorado Plateau in Arizona -also known as Red Rock Country, Canyon Country, Maynard Dixon Country and Dinétah, or Navajo Country. To me, it's "Jimmy Swinnerton Country", named after the famed cartoonist and artist who traveled and portrayed the area extensively via cartoons and paintings in the early twentieth century. Hence the name, "Looking for Jimmy." (If you haven't yet figured out the reason for the name start with my early posts. I'm sure it will become as clear as the sky in the Four Corners region.) Also, in the mere hope of entertaining the reader, my blog entries are intended to be much lighter (often tongue-in-cheek) than my books. Yet one more reason to title this site after a famous cartoonist. Update May 2015: I've decided to expand the subject matter to include all of the Southwestern U.S...primarily southern California, Arizona and New Mexico (aka artist Carl Oscar Borg's "Magic Region".) For more photos and videos check out my Instagram page Gary Fillmore-Looking4Jimmy. https://www.instagram.com/looking_for_jimmy/?hl=en View all posts by Gary Fillmore