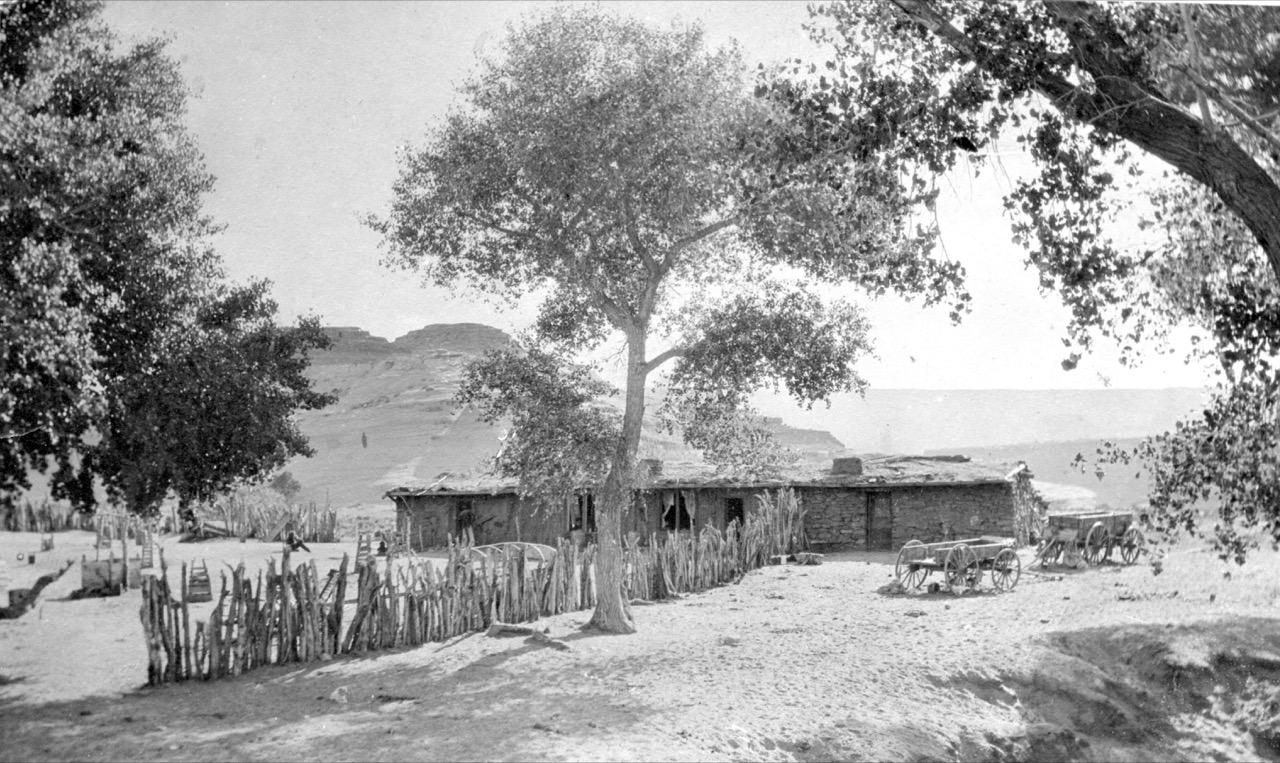 (On the Gleaming Way—Slim Woman and the Kayenta Navajos is currently on exhibit at the Smoki Museum in Prescott until July 2017.  All photos and images from the John and Louisa Wetherill Collection. Courtesy of Harvey Leake.)

“It is hard to put the finger upon the essential qualities in Navajo character.  The person whose opinion I on the whole respect the most is that of Mrs. Wetherill…she has lived among the Navajoes for nearly forty years and brings to the understanding of her experiences a s sharp vigorous mind and a truly scientific curiosity and passion for accuracy.”

Clyde Kluckhohn-To the Foot of the Rainbow

In March 1906 a meeting took place in southern Utah which sounds like a scene out of a Hollywood Western.

John Wetherill was accompanied by only his brother-in-law John Wade when they stopped at a cottonwood grove several miles northwest of present-day Goulding’s Lodge.

The two men had ridden the entire distance through the large red mesas and barren landscape which would later be named Monument Valley. It was then an area so remote and rugged even the U.S. Army was reluctant to enter.  Both were unarmed.

They dismounted and began watering their horses at the spring known to the Navajo as Oljato –Moonlight Water.

Shortly afterwards a tall, slender Navajo man with a weathered face and long grey hair appeared on horseback.  He was accompanied by four riders, all with rifles.

The Navajo headman told Wetherill and Wade to leave immediately. It is not known how emphatic he was, or even needed to be given his armed escort would not hesitate to follow his commands. But it is known Wetherill refused. He told the headman, known as Hoskininni Begay, he had a proposition he should consider.

Just shy of his 40th birthday, Wetherill was a well-known trader and explorer of the American southwest. He knew the Navajo people and language well. Along with his wife Louisa, known to the Navajo as Ashton Sosi (Slim Woman) he had operated several trading posts in northwestern New Mexico –Ojo Alamo, Chavez and Chaco Canyon.

Hoskininni Begay was a local legend of sorts. As a young boy he was one of the few Navajo to avoid Kit Carson’s expeditionary force by fleeing to Navajo Mountain with his father, Hoskininni (or Hush-Kenay, The Angry One.)  For five long years, while most of their fellow tribal members lived in exile in eastern New Mexico, Hoskininni’s people eeked out an existence in the remote canyons near Naatsis’áán.

Hoskininni Begay had lived his entire life in his own country and was proud of it. He was not a man to be trifled with. In 1880 he had killed two miners, Walcott and McNally, who were prospecting on Navajo land. It was a crime for which he was never captured nor punished. To many of the Dineh he was known as “The one who got away with it.”

Wetherill was told again to leave. “We want no white men here.”[1]

Instead of leaving Wetherill suggested they should have a feast. “You get the rabbits, and I’ll furnish flour and sugar and coffee.”[2]

Wetherill had been advised not to go to Monument Valley.  “There are bad people at Oljato,”[3] he was told by several of the Dineh.  “They will kill you.”  Yet despite the warnings and Hoskininni Begay’s orders he remained undeterred.

If Hoskininni Begay let him set up shop near Oljato there would be no need to ride over ninety miles to Red Lake or Round Rock for coffee, flour, and sugar.  Of course Wetherill had an angle. He didn’t like competition.  Having the nearest competitor at least four days horseback ride away would all but assure a monopoly.

Hoskininni Begay softened and began to consider the proposal. He was soon joined by his father and several other men, all with “long hair knotted at the back and tied with bright headbands…calico trousers slit to the knees…moccasins… with silver buttons…”[4] and velvet blouses decorated with silver and turquoise.

After several days of feasting and deliberation a decision was handed down. The Wetherills were granted the rights to open a trading post at Oljato.

Shortly afterwards Louisa Wetherill joined her husband at Moonlight Water, along with their partner Clyde Colville. Over the next four decades John and Louisa became legends in their own time.

Five years after the pow wow with Hoskininni Begay the Wetherills moved from Oljato to Kayenta and opened a trading post and guest ranch.

Jimmy Swinnerton (Yes! The Jimmy in Looking for Jimmy) was a visitor nearly a dozen times between 1919 and 1942.

Famed Western author Zane Grey stayed half a dozen times, lamenting in the guest registry on his final visit in 1929 how the American West as he knew it had vanished. I wonder what Grey would think of Kayenta today?

I could go on and on but you get the idea.  For almost the entire first half of the 20th century Kayenta held the distinction of being the most distant post office from a railway station in the United States. Yet for such a remote location this was “one hoppin place!”

John Wetherill was the heart of the operation, Slim Woman (Ashton Sosie) the soul.

While her husband led guided trips for the rich and famous (along with well known writers, artists, scientists and just plain ordinary folks) to Rainbow Bridge, Betatakin Ruins and Keet Seel and other nearby ruins, Louisa ran the day to day operations at the trading post.

She immediately became implicitly trusted among all the People.  As fluent in Navajo as in English, she became the leading authority on their culture. She became the only white tribal member when the elder Hoskininni designated her as his adopted daughter. He became convinced Slim Woman was Navajo at birth and had been stolen by a white family. How else could anyone explain her intimate understanding of the Navajo people?

Theodore Roosevelt once wrote “Mrs. Wetherill was not only versed in archaeological lore concerning ruins and the like, she was also versed in the yet stranger and more interesting archaeology of the Indian’s own mind and soul…She not only knows their language; she knows their minds…They trust her so fully that they will speak to her without reserve…”[5]

At a tribal council of the Navajos in 1923 many of the tribal members refused to start the proceedings until Louisa Wetherill arrived. “Government officials, Indian agents, important gentlemen from Washington fretted about it, but nothing could be done.”[7]

Ashton Sosie’s extraordinary life is also the subject of an exhibition currently featured at the Smoki Museum titled On the Gleaming Way—Slim Woman and the Kayenta Navajos. Included are a large collection of archival photographs and several of the more than forty books, all from the collection of Harvey Leake, the Wetherill family archivist.   The lodge’s guest registry is also on display. The book is notable not only for the signatures of famous guests but also the sketches and miniature paintings by the visiting artists.

I have been fortunate enough to know Harvey for many years, having first met him when he loaned some photos of artist Lillian Wilhelm Smith for an exhibition at the Blue Coyote Gallery in 2005.  Lillian was a close friend of John and Louisa Wetherill. She visited Kayenta so frequently that Harvey’s mother, Dorothy Lillian Leake, still referred to the artist as “Aunt Lil” when I interviewed her in 2007.

His collection of archival photos provided extensive material for my book Shadows on the Mesa-Artists of the Painted Desert and Beyond.

Actually that’s an understatement.  The book would not have been possible without his contributions.  What’s surprising is how much the collection has grown since my book was published in 2012.  Many of the photos on exhibit at the Smoki Museum are fresh material.

Harvey once told me every other Monument Valley resident he ever met claimed to be a descendent of the elder Hoskininni.

[1] Gillmor and Wetherill, Traders to the Navajo, page 73

[2] Gillmor and Wetherill, Traders to the Navajo, page 72

[4] Gillmor and Wetherill, Traders to the Navajo, page 74